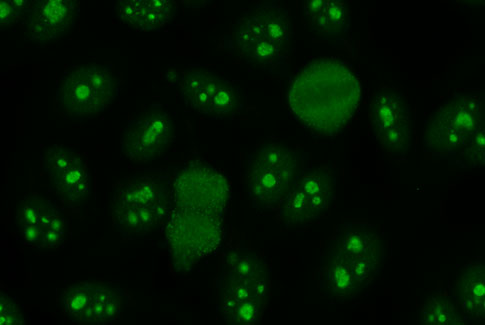 ANA ELISA Vs Indirect Immunofluorescence: Do We Have A Final Verdict?

Anti Nuclear Antibodies (ANA) are considered as a precursor for diagnosis of Connective Tissue Diseases (CTD) in addition to playing role in diagnosis of Autoimmune Liver Diseases. In routine commercial laboratory practices, ANA screening by Indirect Immunofluorescence assay (IIFA) and ELISA (EIA) are two most frequently used techniques. Over the years, manufacturers of
IIFA and EIA assays for ANA have both pointed arguments supporting the use of the respective platforms but there seems to be a lack of clear understanding towards the differences making it remain unclear as to which one is really right for ANA.

This paper explores the current situation in light of established facts, recent advancements in both techniques and the currently relevant international guidelines for ANA testing available worldwide.

What are autoimmune diseases?

Immune system in our body works as an intelligent ‘security system’, having various mechanism used at apparent time & suitably best to protect our body. One important method is - generating antibodies to destroy the antigens. But in some cases our Immune system malfunctions, it start recognizing some cellular proteins, especially nuclear proteins as antigens, hence generating antibodies against them. This situation results in what is referred to as “autoimmune disease”. In current clinical and diagnostic perspective, un-specific symptoms, slowly developing conditions, need for careful selection among treatment options makes this subject one of the most challenging and important area of modern medicine.

In the best benefit of patient, for diagnostic purpose one should employ most sensitive technique in the very first step i.e. screening of Patient. The aim is to miss least possible true patients, because reporting any positive patient as negative not only excludes him/her from the possibility of treatment for AI disorder but also changes the course of clinical actions into confounding diseases such as TB, Infections, Sarcoidosis and other non autoimmune disorders. One should hence consider the sensitivity of the Assay / Technique being used as the key decision making factor of choosing between assays or techniques.

What is role of ANA in diagnosing such diseases?

ANA or Anti Nuclear Antibodies are a group of antibodies directed towards cell nucleus. ANA test is ordered when the physician suspects an underlying autoimmune disease such as Connective Tissue disease or autoimmune liver disease. It should hence be considered a screening test for such autoimmune diseases. Because ANA is present in low frequency also in healthy population, an ANA test result alone does not confirm a disease but screens for the autoimmune disorders in general.

What are the common techniques employed for screening ANA?

ANA by ELISA: In ELISA, serum is allowed to be incubated along with the fixed antigens in micro wells. After incubation, antibodies bind with antigens only if they are present in serum or else they are washed out in washing step. Then conjugate such as HRP is introduced which binds with antigen-antibody complex. Further substrate incubation provides a colour, which is proportionate to the concentration of antigen antibody reaction. Thus results are obtained as positive or negative along with a value. This assay provided by various manufacturers uses either an mixture of cellular antigens or cells / nuclear extracts or a combination of both. The assay is fairly simple to use, requires only basic ELISA training, can be automated and provides fairly objective results. Results are provided as positive/negative or with an index value against a cutoff.

ANA by IIFA using HEp 2 cells:  IIFA testing involves incubating dilutions of patient’s serum with monolayer of HEP 2 cells. Antibodies adherent to the monolayer are visualized by antihuman immunoglobulin reagent that has conjugated to a fluorescent tag.[4] allowing the user to visualize the result under a fluorescence microscope. The results typically include the reading as positive/negative along with the titer for screening, the pattern observed if result is positive and either the end titer or intensity of fluorescence. The assay comes in 2 versions: As a standard HEp 2 cell and a transfected cell line by name of HEp 2000 with higher sensitivity. The assay procedure is simple to perform and interpretation of results is done by a trained observer under a fluorescence microscope.

ELISA or IIFA: Which is really better?

To answer this, one must look at the objective of the ANA test. ANA is a screening test for connective tissue diseases and/or autoimmune liver diseases. As a screening test, the assay should be as sensitive as possible because a false negative result would lead the clinician towards an alternate incorrect diagnosis. The sensitivity is hence the central concern.
There is no question that the ANA IIFA kits offer a superior sensitivity compared to all available ANA ELISA kits, though the specificity of the ELISA kits have been demonstrated to be better in some studies. It is precisely for this reason that ANA HEp 2 or HEp 2000 IIFA kits are considered to be the 'Gold Standard' for ANA detection.

ELISA on the other hand offers higher specificity. As a result, for profiling an ANA positive, an ELISA or LIA assay can indeed be used but as a screening tool, the IIFA using HEp 2000 or HEp 2 cells should really be considered as the ideal assay to be used.

Are there other advantages of ANA IIFA over ANA ELISA?

In addition to the superior sensitivity, which, as discussed above, is considered the main reason why IIFA is better than ELISA for ANA screening, IIFA offers addtional advantages:

Even though IIFA using HEp2 cells remains the method of choice for ANA detection, there is a problem: Anti SSA/Ro antibodies are not always readily detected owing to scarcity of antigen in HEp-2 cells due to antigen leaching and fixation issue.[1]
The solution is a genetically modified cell line known as HEp 2000. HEp 2000 uses HEp2 cells transfected to overexpress SSA/Ro antigen causing a remarkably high sensitivity for SSA/Ro missed on standard HEp 2 cells.[10] This transfection not only detects the presence of SSA/Ro but also identifies it with a unique SSA/Ro pattern. The other patterns and overall specificity of the assay remains unaffected, while the sensitivity is clearly enhanced. HEp 2000 should hence be considered as the most sensitive ANA detection tool available for screening CTD and AI Liver diseases.

Are there established guidelines for ANA testing and reporting?

Additionally, more than 30 studies and various papers have consistently suggested that IIFA using HEp 2 (Or HEp 2000) cells should be considered as the gold standard for ANA.

More recently, in 2009, the American college of Rheumatolgy (ACR) issued a position statement on testing ANA, which recommended that “The Immunofluorescence (IF) ANA test should remain the gold standard in ANA testing”.[3] Also a review of the literature by the committee indicating that upto 35% patients with SLE and a positive ANA by IF were found to be negative on solid phase (ELISA/Multiplex) assays.[3]

So whats the final verdict?

The 2013 study by the WHO/CDC/Arthritis Foundation/European Group more or less gave a final verdict in favour of IIFA as the recommended ANA Screening assay. The sensitivity remains the key concern and on this point the IIFA scores over all ELISA based assays. The additional advantage of more information in terms of specific patterns and well understood disease corelations further supports the use of IIFA as the method of choice for ANA testing. The transfected HEp2 cell line (HEp2000) is a further improvement over the standard HEp2 cells and should be considered as the true gold standard.

To know how you can start or enhance Autoimmune Testing using our new LED based Fluorescence Microscopes, Transfected HEp2000 cell lines and LIA based profiling assays,

For more details regarding serological detection of autoimmune diseases, please do write to us at mail@ozonebio.com. If you would like to make further comments on this topic, please feel free to share the same with us. We appreciate feedback which can make our articles more accurate, up to date and as impartial as possible.